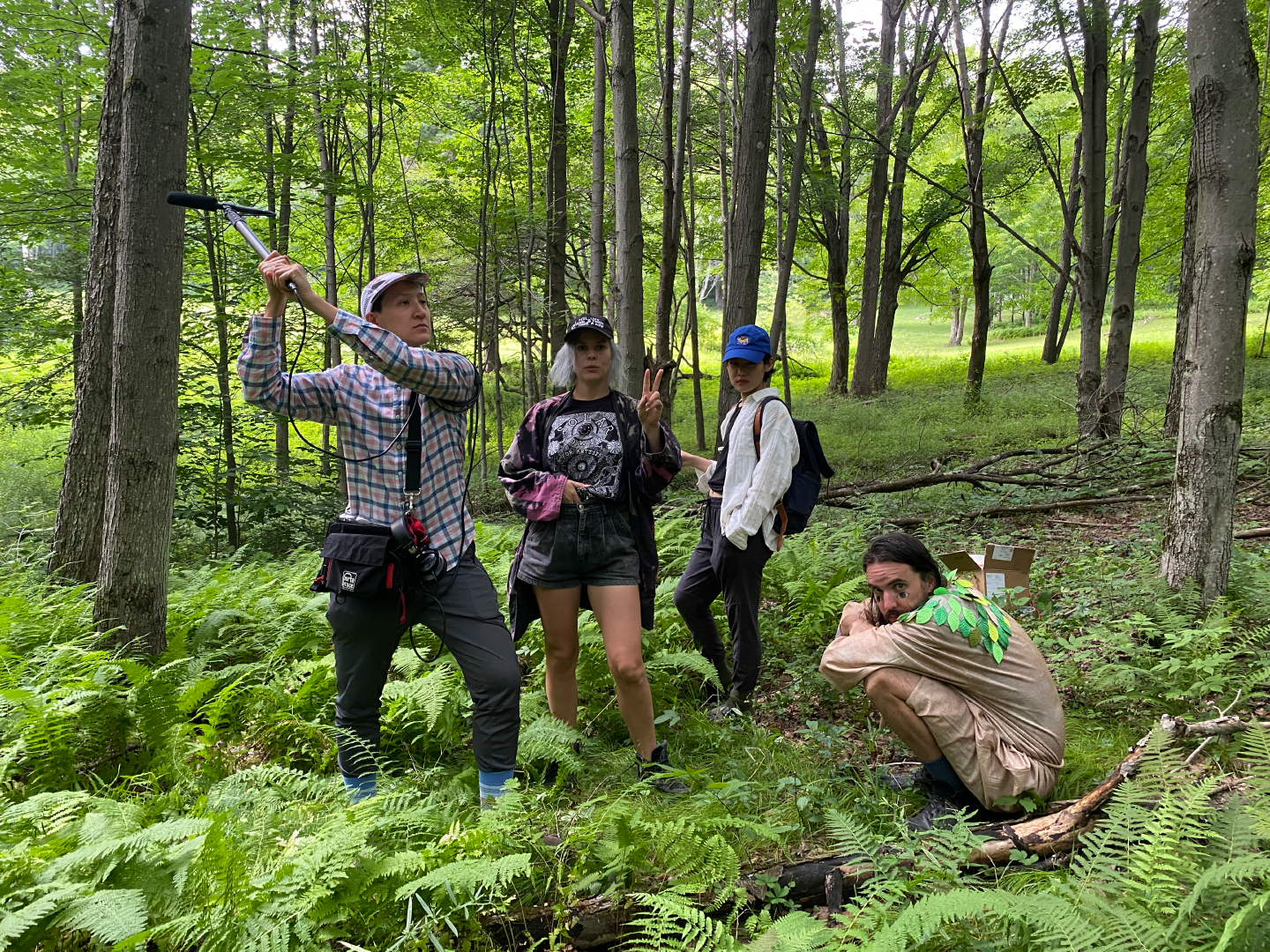 Here we present a Q&A with artist Tzu-Huan Lin, in which he talks about the concepts and inspirations of the film. And brings us to behind the scenes of the production. You can see the exhibition here.

What inspired you from the story of Canjie? Are there any other references?

As a Taiwanese immigrant artist living in America, I found it difficult to convey my personal story through my film. My personal story is important but detached from the world I live in. I want to arrange my personal stories by framing them as ‘myths’. In Knotted Water Sizzled Tongue, I merged two mythoi, an idea and a historical event into a single story, including the story of Cangjie, the image of Janus the god of transition, the idea of Utopia, and the idea of the American land rush.

The story of Cangjie was about the journey of Cangjie inventing language out of nothing. This plot is the core of the film. The image of Janus was used in the costume that I created. I took the idea of Utopia and the American land rush into one to symbolize immigrants searching for their land, which expresses in a collection of performances with music, ropes and flags.  As for the story of Cangjie, my favourite part was from Huainanzi: ‘After the language was invented, the sky rains grains; the ghost hides in the woods and cries.”’This inspired me that before language, it was a time of no such thing, which symbolised my life before I came to the United States. A time before I could speak English. The story of Cangjie symbolised my current life situation, which is the time of transition. In the film, I played the main narrator, the hunter, and the god Janus. This was my attempt to interweave the story of Cangjie and my personal life.

As a US immigrant yourself, can you tell us more about how you manifest your personal experience in creating this film?

The development of Knotted Water Sizzled Tongue came a long way. It all began in 2018 while I was painting sea turtles, or you can say artificial satellites. And enabled me to start researching the relationship between sea turtles and artificial satellites. I learnt about a place called Point Nemo where all the spacecraft’s cemeteries are located. With further research, I discovered that France launched their first automotive artificial satellite called Jule Verne and retired it at Point Nemo. I started reading 20,000 Leagues Under the Sea, where I found that Captain Nemo was an antisocial heroic utopian. That was the time I connected my immigrant background, utopia, the American Dream, the feeling of distance altogether. You might ask, but how did all the research end up in Cangjie? 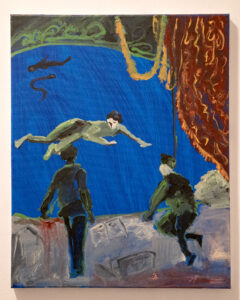 So the entire project became too complicated to put into one frame. It troubled me for a long time until an online residency with Vital Capacities. I was still working on the Utopia workshop and tried to figure out how to frame the research. One of the artist’s meetings with artist Larry Achiampong inspired me. I asked him about how he dealt with big subjects and he said: ‘We are in a marathon, not a sprint.’ Although I never ran marathons, I got what he meant. That was the time I focused back on myself, my history and who am I. I took an examination of myself and realized what stage of my immigrant life stood.

Can you tell us more about the elements in the film such as the costume and the Mise-en-scène?

The process of making this film started differently from all my other works. I usually first create the video, then work on the related installation or exhibition format. For the Knotted Water Sizzled Tongue, I began with what I imagined the installation would be. I imagined the work with seven screens. Thus, I came up with seven different scenes with unique landscapes where all the stories happened. Although the original idea was to have it in one circle to create an immersive feeling for the audience, the idea fell through. The exhibition currently showing at Taipei Fine Art Museum is different due to the limited space of the museum. I changed the circle version to a long curve line version.

The single-channel version is also different because of the nature of online screening.

I designed the costume to create an ancient mystic look. I used robes as a base layer and added decorations on them according to the Cangjie paintings. Cangjie had four eyes, a leaf scarf, a necklace with a mirror, and a scissor. I had a face right behind my head, fur on the neck with ropes, and a painted Janus’s face in the centre of the robe. The idea of the ropes and flags was originally from the American land rush. In the story, I also used ropes and flags as a guide for Cangjie to follow in his journey. I like to have multiple meanings for each element. 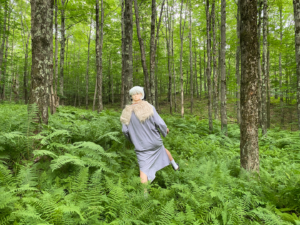 The entire film took two days to shoot. I was planning to finish everything in a day, but we took it slowly. I had a team of seven people, a director of photography, a sound, two actors, and three production assistants. We shot it in Franklin, upstate New York. A place called Franklin Chthonics, with acres of land and beautiful landscapes. Click to view pictures.

Any of your other works that are related to this film?

I’ve made works that relate to mythological stories and my personal stories. When I made the first version of The Yellow Snake is Waiting, I put together multiple ancient Chinese myths into one narrative to picture the idea of desire. It was the first major work that I created, and it was the beginning of my immigrant life. It was a time with all the uncertainty. Knotted Water Sizzled Tongue can be the sequel to The Yellow Snake is Waiting. I also used the same white wig in both films.

What’s your next step?

I am developing the new story of the sequel of Knotted Water Sizzled Tongue. It will be in the future when Cangjie is very old and I become a new species.