Still from The Noise of Silence. Fatima Khademi. 2021. Courtesy of the artist.

The Noise of Silence is a new multi-disciplinary artwork by Fatima Khademi, comprising found-image collages, a series of video works and a hand-woven carpet developed through a week-long durational performance. The artwork explores the history and present-day circumstances of the Persian-speaking Hazara, the most persecuted peoples in Afghanistan and the community to which Fatima belongs. The artwork draws from Fatima’s memories of weaving carpets as a child labourer in Quetta, the area in Pakistan to which half a million Hazara people have fled.

Weaving is an occupation that punctuated Fatima’s early life, and many of her childhood memories were processed with her fingers at the loom – yet she had never used this medium creatively, always following a compulsory ‘map’ determined by the buyer. For The Noise of Silence Fatima embraced weaving in her artistic practice for the first time. Travelling from Lahore to her family home in Quetta, Fatima spent a week weaving a carpet – not to any predetermined design but selecting her threads according to what she could hear. While she worked, Fatima played audio from her homeland in Afghanistan: news of current events, podcasts describing Hazara history, folk and pop songs by Persian and Afghan singers. 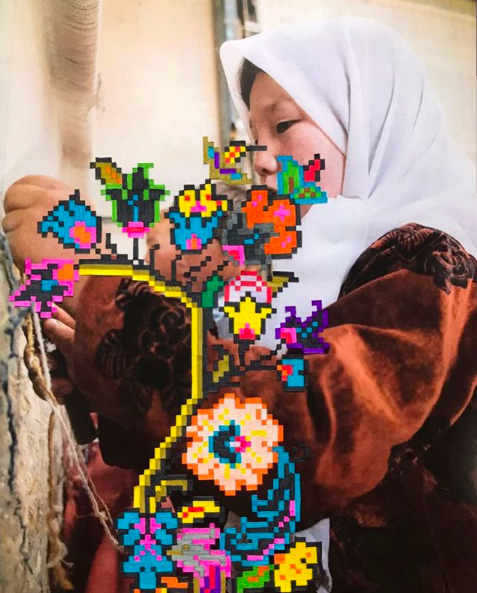 Fatima has laced these sounds and stories into her carpet, resulting in a deeply intimate work which instigates wider conversations about the socio-political situation of the Hazara community and displaced peoples the world over, considering what it is to be separated from one’s home.

Click here for a detailed description and critical text (in a pdf) of The Noise of Silence. The text includes links to audio, including music, podcasts and news reports, which can be heard as part of the film’s soundtrack.

The Noise of Silence by Fatima Khadem (2021) has been commissioned by Platform Asia for the Sudden Beams – Homing In programme. Supported by Arts Council England.
Find out more about the Sudden Beams programme here. 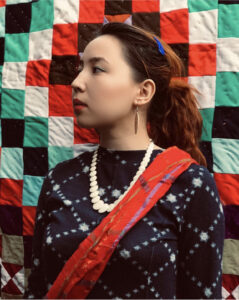 Fatima Khademi was born in 1999 in Quetta, Pakistan. Despite never having been to Afghanistan, she is clear that this is her home country as she is part of the Persian-speaking Hazara community. Though they are the third largest ethnic group in Afghanistan, the Hazara are among Afghanistan’s most oppressed people, having faced decades of persecution. During the Afghan-Showravi war and Taliban regime huge numbers of Hazaras sought refuge in neighbouring Pakistan, with Khademi’s family among them.

For Homing In, Khademi has travelled from Lahore to Quetta where she is producing a durational performance resulting in a woven carpet. Streamed online as short video captures, Khademi will work at a traditional loom for 14 days. Here, she weaves her ethnic background into the tapestry not by pattern but by sound: listening to traditional Hazara music and radio broadcasts, with the media her only access to news of Afghanistan. Having woven as a child labourer, this is the first time Khademi has returned to the loom to make a work for herself and as part of her art practice.

Khademi’s practice traverses diverse media from painting and sculpture to performance and video, with her artworks unified by their deeply personal focus. Choosing quiet reflectivity over overt politicism, Khademi’s artworks engage in identity politics and grow out of poignant childhood memories and experiences , drawing audiences into sharp commentaries on the socio-political situation and ongoing conflict faced by her people. In this sense, Khademi uses her own intimate experiences to bring forth universally relevant conversations about ethnicity, oppression and displacement. This is particularly evident in her performance works whereby her body itself becomes a tool for communication.

Khademi received her FSC degree from Afghan lycce “Istiqlal High School” in Quetta in 2016. In 2018 she was awarded the UMISAA scholarship and is now in the third year of her Fine Art BA at Beaconhouse National University in Lahore, Pakistan.